If you haven’t heard of Ed Sheeran by now, you’re living under a rock in the middle of a desert. The 21-year-old English singer/songwriter achieved worldwide success (he’s sold more than 4 million albums and performed at the closing ceremonies of the 2012 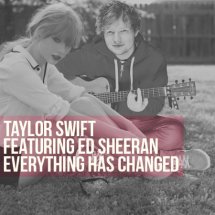 Olympics in London!), but has barely scratched the surface here in the United States. However, people are quickly taking note of him after Taylor Swift (yes, THE Taylor Swift!) featured a duet with him called “Everything Has Changed” off her latest platinum-selling album RED.

Ed Sheeran’s debut album + was released last year, but I wasn’t introduced to it until I heard a few friends cover “The A Team.” Johnny Promo raved about Ed and was kind enough to hook me up with a copy of the album—I am totally hooked!! It’s the perfect music to listen to when you’re in a bit of a chill mood, but don’t want to be put to sleep.

Lyrics aside, this album has so many unexpected elements. He has such a smooth voice, and I love the little hints of his accent throughout the songs. There are plenty of slower, romantic songs any girl would melt over, but fellas, there is plenty for you too. At first glance, you probably wouldn’t guess that Ed has some serious rap skills, but I’m impressed! I’m HUGE on lyrics, and EVERY song on this album is packed full of raw, emotionally charged lines that resonate with me. It’s very easy to see why Taylor Swift picked him to partner up with—their writing styles are similar and sometimes I found myself thinking, “Dang, I wonder who inspired that lyrical jab.”

While “The A Team” is a fantastic song, “Give Me Love” and “You Need Me, I Don’t Need You” are definitely my favorites.  “Give Me Love”got me with this:

’cause lately I’ve been craving more,

And it’s been a while but I still feel the same,

Maybe I should let you go,

You know I’ll fight my corner,

And that tonight I’ll call ya,

After my blood is drowning in alcohol,

No I just wanna hold ya.

Just as I’m sure Taylor Swift’s exes pray they aren’t the subject of her next hit single, Ed Sheeran doesn’t exactly seem like he’s a good one to mess with either. Since I believe there’s nothing like writing a catchy diss song, “You Need Me, I Don’t Need You” is right up my alley. Hopefully the intended target is shooting themselves in the foot for this one:

Hell, don’t need another word-smith to make my tune sell?

I sing fast, I know that all my sh*t’s cool

I will blast and I didn’t go to Brit School

I came fast with the way I act, right

Cause you need me, man, I don’t need you

You need me, man, I don’t need you

You need me, man, I don’t need you

On that note, Ed Sheeran, you’re fine by me!! He’s hitting the road with Taylor Swift in the Spring, so I hope everyone is just as excited as I am to see what these 2 bring to the stage. It’s going to be FANTASTIC! This tour is definitely going to sell out, so make sure you get your tickets NOW!

I want to know what your favorite song off Ed’s album is.
Let’s chat! @TheMissRuiz